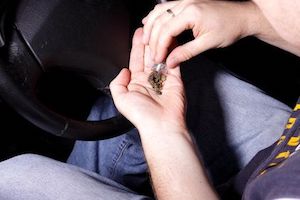 Though the term “DUI” is usually associated with drunk driving, it can also refer to driving under the influence of drugs. These drugs can include both illegal substances and prescription drugs, and the DUI penalties for both are quite severe. In addition, if a law officer finds illegal drugs or drug paraphernalia in your vehicle, you could also be facing drug possession charges. Because of the serious nature of the charge, if you are facing a drug DUI in greater Phoenix, you should be sure to have an experienced attorney working in your defense. Attorney James E. Novak is a criminal defense attorney who focuses primarily on DUI charges, giving him a detailed knowledge of DUI law, drug laws, and effective defense strategies for these allegations. If you are facing DUI charges of any kind, contact us today to schedule a consultation.

What is a DUI with Drugs?

You can be charged with a DUI with drugs in much the same way that you would be charged with drunk driving. If a police officer stops you because of suspicious or erratic driving patterns, he may administer a field sobriety test. If he or she gives you a failing score, you may be taken into custody and asked to submit to a blood test. Unfortunately, some substances , including marijuana, can stay in your blood stream for weeks, and could raise an alert on a blood test, even if you are completely sober at the time of the arrest. Plus, with Arizona’s extremely strict DUI laws, all that is required for a conviction is for the prosecution to declare that you were “impaired to the slightest degree.” Because of the relative ease of conviction, a qualified attorney is essential if you hope to have your charges reduced or dismissed.

Penalties for a DUI with Drugs

In most cases, a first-offense drug DUI or marijuana DUI is classified as a misdemeanor offense. Depending on the specifics of your case, if you are convicted, you could be sentenced to jail time of at least 10 days. You could also face at least $1,250 in fines, community service, and the use of an ignition interlock device. As with drunk driving charges, there are steeper penalties for second and third offenses.

Though the consequences of a drug DUI are grim, it is important to remember that those facing charges will not necessarily be convicted. Attorney James Novak has a track record of successful legal defense, and has had a number of DUI and felony drug charges dismissed in court. Often, he is able to prove to the court that the police did not follow proper protocol. For example, they may have stopped a driver or searched their car without probable cause. At other times, he has demonstrated that blood, urine, or breath tests were not properly administered, or that the results were tainted. When a dismissal is not possible, Novak is often able to attain a lesser sentence. By creating a careful plea arrangement, he may be able to secure a reduced jail sentence or a smaller fine. He can also have some charges reduced from a felony to a misdemeanor.

With the serious consequences of a drug DUI conviction, it is important that you secure the best legal representation. To find out how attorney James E. Novak can help you, contact his law offices today. Whether this is your first charge or your third, Mr. Novak has the skills and experience necessary to construct an effective defense and argue your case aggressively in court.

CONTACT US NOW
Practice Areas
Phoenix DUI Law Blog - Drugs
Client Reviews
★★★★★
I was facing criminal charges with three priors in my history. Mr Novak was very helpful and got me a lighter sentence than I probably deserved. He is a great attorney and I would highly recommend him. A. T.
★★★★★
James worked tirelessly behind the scenes with the prosecution, to decrease my son’s charges to a more reasonable penalty. I could not have asked for a better, more professional attorney. He treated my son with the utmost respect and walked him through every step of a very difficult situation. S. G.
★★★★★
Attorney Novak did an outstanding job defending my son. Due to his extensive professional background within the court system, he was successfully able to defend my son during a very difficult time for my family. I highly recommend Attorney James Novak for your legal needs. T. G.
View More
Submit a Law Firm Client Review