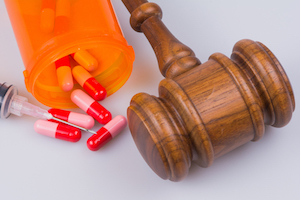 In Arizona, you can be charged with driving under the influence for a variety of drugs, including prescription medications and, in some cases, marijuana. The penalties for a first-offense drug DUI in Arizona can be severe, making it all that more important to work with an experienced attorney. If you have been arrested for driving under the influence of drugs, contact the Law Offices of James E. Novak today to schedule a free consultation. Attorney Novak understands the stress and anxiety that can come along with a DUI arrest and does everything possible to put you at ease as he develops a compelling defense to the charges you face.

It is a violation of Arizona drug DUI law to operate a vehicle under the influence of any drug that impairs the ability to drive safely. These drugs, including both illegal and legal drugs, may include any of the following substances:

As a general rule, it is against the law to drive with any amount of an illegal drug in your system. Some illegal drugs can stay in your system for weeks. If your blood test is positive for that drug, you can still be convicted, even if you were not under the influence at the time of your traffic stop.

When it comes to prescription drugs, such as oxycodone or Xanax, you can still face drug DUI charges if you did not take the medication as directed, if the prescription is expired, or if your name does not appear on the prescription bottle.

What to Expect During a Drug DUI Traffic Stop

If a police officer suspects that you are driving while under the influence of drugs or alcohol, they will pull you over. From the moment the traffic stop begins, the officer is trained to look for visual signs of impairment. They will also ask you questions to determine if you are under the influence of drugs. If the officer develops probable cause to believe you were impaired by drugs, they will ask you to take a blood test.

Consequences of a Drug DUI in Arizona

Arizona drug DUI law provides for harsh punishments for those convicted of driving under the influence of drugs. For example, a drug DUI first offense is typically considered a Class I misdemeanor, which is punishable by:

Notably, Arizona considers DUI convictions from other states when determining the punishment for repeat offenders.

James E. Novak has the skill and expertise to reduce your sentence if a complete dismissal of the conviction is not possible. He offers extensive experience in this specialized area of the law.

Were You Arrested for Driving Under the Influence of Drugs in Maricopa County?

If you’ve been arrested and charged with a drug DUI offense in Arizona, it is essential to contact an experienced lawyer who has specific experience dealing with Arizona drug DUI law. Attorney James E. Novak is an experienced drug DUI lawyer in Phoenix, AZ, who can help you understand your rights and work with you to develop a compelling defense, regardless of the government’s case against you. If the evidence is stacked against you, he can also negotiate with prosecutors on your behalf to secure the most favorable sentence possible. To learn more, and to schedule a free consultation with Attorney Novak today, call 480-413-1499.